A Night Alone in the Jungle – Costa Rica day 8 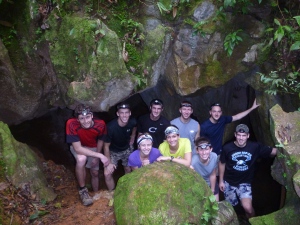 Our morning got off to an early start. We ate breakfast and quickly prepared to hike to a nearby cave. The cave was 900 feet from the entrance to the farthest known room, with only one small passage still unexplored.  Upon entering the cave, we were greeted by the sounds of hundreds of cave spiders and crickets, which had a strong resemblance to spiders, the screeching of bats. We soon found out that bats scared one particular member of our group a lot, and we got quite a chuckle when one flew directly into her almost immediately after she told us of her fear of bats.

We navigated deeper and deeper into the depths of the cave. We used headlamps to see out way and avoid the 3-12 foot pits the water had carved in the floor and helped one another navigate when the floor was slippery. This was no cement-walkway cave tour. This was the real deal. We got muddy, wet, and had to help each other from becoming stuck or hurt at certain parts.

When we finally reached the back room, there was a large pillar of salt from years of water deposits. On the adjacent wall was the unexplored passage about 10 feet above the floor. Of course, I wanted to explore, but I knew the answer so I did not ask.

We turned our headlamps off and experienced the epitome of darkness. No light made it this far into the cave. It didn’t matter how long we stayed in that room, our eyes would never receive any light to read and we would never see. As the group silently stood and took in the darkness, Carlos spoke. He told us to pass our headlamps to him.

Everyone thought Carlos was joking; it was far too dark to walk out of the cave without light. However, Carlos reassured us that other people had done it successfully and he was confident in our group’s ability to find our way out in the dark. The cave was one long passage, so we couldn’t get lost. The difficult would be in navigating around all the holes and formations. One guide went several meters ahead with one light so the leader of the group would be able to make out, and then we were on our way.

We made a chain and held one another hand-in-hand. I was in the front and told the person behind me each step they needed to make. One-by-one the message would be passed back as people came to that step. In 68 minutes, we found the entrance. 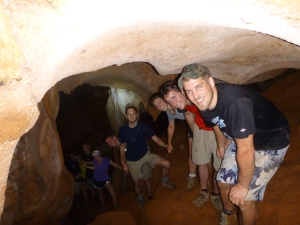 Although we had not gone out as quickly as we may have been able to, everyone stayed safe and took care of one another. This experience required large amounts of teamwork and we certainly had that. Everyone showed a lot of respect for each other. I have been told this is not typical of many groups, but every Calvin College group I have ever been a part of has had respect as one of its central characteristics.

Once out of the cave, we hiked a mile or two back to the swimming hole for a dip in the cool water before heading back to the house to rest for an hour. We would be leaving in the afternoon to participate in overnight solos on the riverbank. Few members of the group had done something to this before. Many in the group were apprehensive though.

In the afternoon, the leaders led each member of our group to different plots on the riverbank. We took emergency whistles, a tarp, some cord, and whatever else we needed for the night (sleeping mat, tooth brush, etc). We were told not to bring food but rather to embrace fasting until the next afternoon when we would be fed again.

My hammock strung just upriver from the large boulder

I explored my plot and looked for a suitable place to set up my hammock. No places were going to be very safe. I either would be strung up a good distance over sharp rocks or hang over the river. I decided that the river looked much cooler so I hopped rocks until I got out to a fallen log that had wedged itself against a boulder.

After starring at my workspace for some time, I knew how I would string my hammock and quickly went to work. With one end of my hammock tied to the roots of the fallen tree and the other tied to a limb that had snagged about 10 feet downstream, everything was all set up. These were large pieces of wood and were secure.

After stringing up my hammock and tying the tarp over it, I realized the log was infested with termites. It was too late to change my whole setup – I was not going to work in the dark. I pulled the tarp lower on that side to act as a barrier between the termites and myself. It did its job remarkably well.

Before night fell, I hopped out to a boulder in the middle of the river. Lying there was peaceful. The only sound I could hear was the rushing water of the class V rapid above me; there was not a single sign of other people anywhere I looked. I was entirely alone and it was wonderful.

I fell asleep 12 inches above the warm Costa Rican water with birds and frogs singing their songs all around me. The river was loud but calming and the night was cool but comfortable. Life was good.

Please support me by sharing this:

Posted by Nathan Menkveld on 27 February 2012 in Backpacking, Central America, Costa Rica, Education/Training, Places I Have Written About